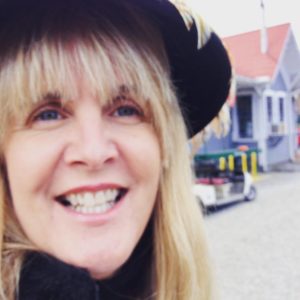 ~I recently graduated from the debut class of a full-time, on-campus, two-year MFA in Creative Writing program at The College of Charleston, where I won the 2018 MFA Fiction Prize. I loved being a student again with the all twenty-somethings! My first short story, “Bubbles Here,” will appear in the Chattahoochee Review in December 2018. 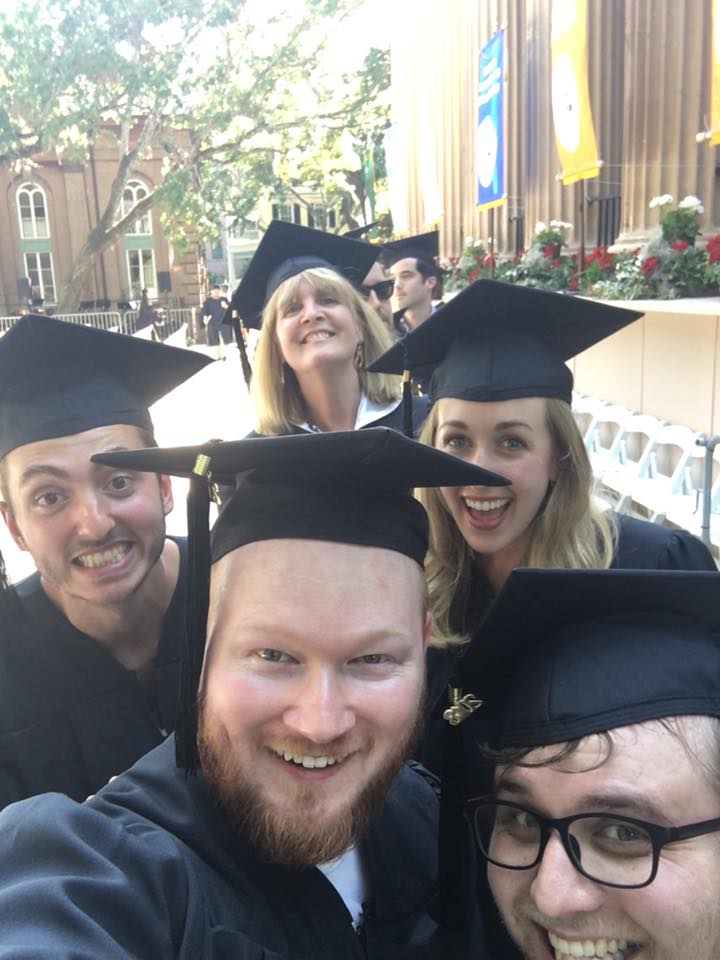 ~I like the alphabet, especially R-S-T-L-N and E. So it’s no surprise I’m a $34,000 winner on The Wheel of Fortune. A decade before that, I won on the original Family Feud with my parents and two sisters. Yes, I kissed that slightly tipsy rogue Richard Dawson. 😉 But I also got to freeze into Gothic picture mode and then unfreeze and bound onto a stage from behind a giant cross-stitched family crest. Just say yes to that!

~I ran with the bulls at Pamplona in Spain, one of the craziest and most exciting things I’ve ever done. 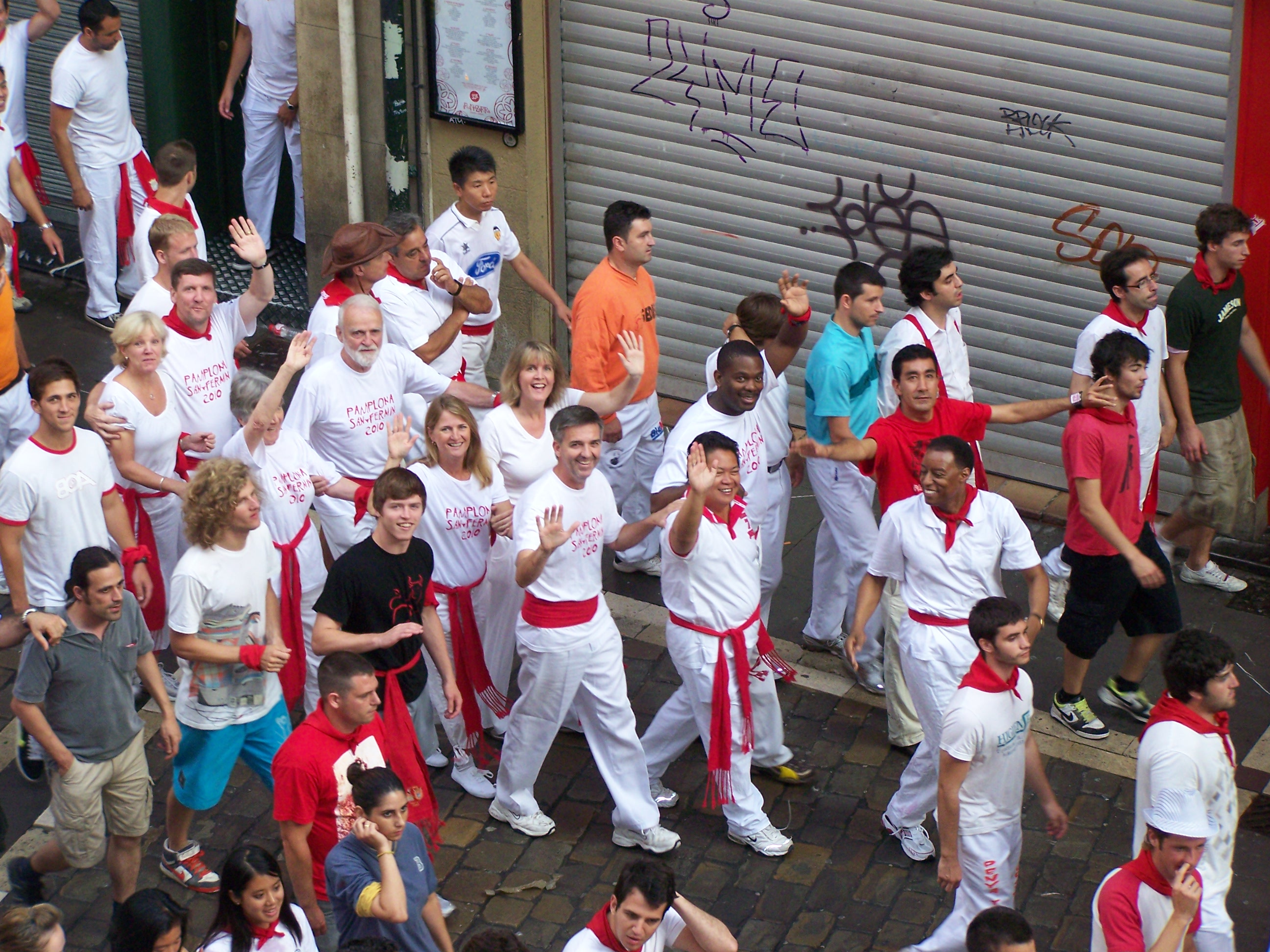 Pamplona: I’m next to the guy in the orange shirt. This is on the running route right before the blasts of the horn signifying that the bulls are loose. We’re walking forward to find a good place to stand.

~I scooped The New York Times from my computer at home as a freelance journalist for The Charlotte Observer by accidentally inciting a feud between John Rosemond, family psychologist and parenting expert, and the renowned pediatrician Dr. T. Berry Brazelton, over the topic of potty training; the story was picked up by The New York Times and Dr. Dean Edell of talk radio fame.

~I spent my entire junior year in college at the University of Strathclyde in Glasgow, Scotland, where I pulled pints of ale as barmaid at the university pub and listened to bagpipes a lot from my dorm window.

~I grew up one of seven kids on Johns Island, a rural sea island near Charleston, SC, and helped Dad build our family’s log home. I played in the pluff mud, sat on docks daydreaming, rode the chain below the bowsprit on my parents’ sailboat and watched dolphins swim mere feet away, and in general, lived an idyllic and occasionally hardscrabble Lowcountry life. The home-building phase meant we spent five years in a single-wide trailer with two campers attached via a boardwalk Dad built. My sisters and I slept in one camper, and the boys in the other. I’ll never forget the day our chestnut quarterhorse Ozzie got loose. I opened our camper door one morning, and he stuck his head inside to wish me good morning.

~I’ve been married for twenty-nine years to a great guy named Chuck, a recently retired commander in the US Navy Reserves who did two year-long military tours in Afghanistan. We have three kind, musically-inclined kids, all of whom have been brought up on the Beatles as the family’s go-to band.

~I’m guiltily obsessed with several Real Housewives franchises, and of course I have to watch Southern Charm, even though almost no one on the show is from Charleston. I appeared with my daughter in one episode at a fake ball.

~I’ve occasionally rescued vulnerable cats and dogs and gotten them safely situated…I seem to stumble into those situations. It’s a never-ending problem, isn’t it? I think the most good I can do is take care of my own pets well. I love our two tabby cats, Benny and Joon, so much that my kids call me a crazy cat lady, and our sweet old black lab mix, Striker, is my constant companion.

~A certified English teacher, I subbed regularly at the local high school while writing my first rom-com novel, a zany historical called When Harry Met Molly, which was inspired by my love of Jane Austen and Monty Python. I went on to write a dozen more historical and contemporary rom-coms for St. Martin’s Press and became a USA TODAY bestselling author. My books have received starred reviews from Booklist, Publishers Weekly, Library Journal, and BookPage.

~ I’m excited to announce that as an aspiring mainstream novelist and short story writer, my writing horizons have expanded, maybe even come full circle. My roots are still firmly planted on that Lowcountry dock of my childhood, where I basked in wonder at the world and spun stories in my head. I have many left to tell, and I look forward to sharing them with you.

Thanks for spending time getting to know me. I wish you all well!

Welcome, fellow readers and writers! Click here to read about some crazy stuff I've done--and what makes me tick, which is most definitely my family, friends, books, music, and the beautiful Lowcountry that I love. Read More…

Sign up for my newsletter and get an occasional roundup of posts, book recs, and favorite links!

So proud to know and love this guy!!! Congrats, Er

Our sweet daughter at her cousin’s October weddi

Kieran is a USA TODAY bestselling author of fun fiction for women. She writes for St. Martin's Press. Read More…

Need to find something?